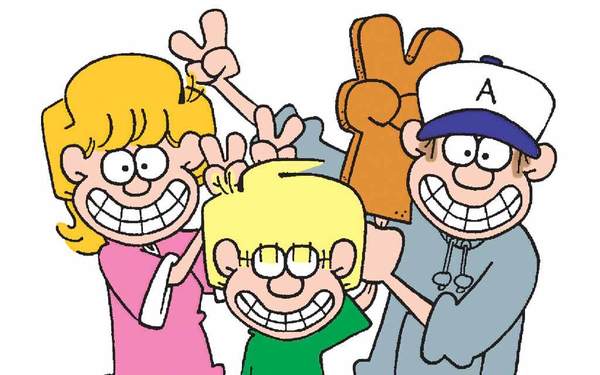 FoxTrot by Bill Amend occupies an odd place in the canon. It’s not the profound artistic achievement of Bill Watterson’s Calvin and Hobbes. It’s not a longform dramatic saga like Garry Trudeau’s Doonesbury or Lynn Johnston’s For Better or For Worse nor is it political satire like Trudeau’s genius work. It’s not the glorious weirdness of Gary Larson’s The Far Side. And it’s not the poignant nihlistic tragedy of Charles Schulz’s Peanuts.

And yet, I don’t think anyone will balk if I put it in the canon next to those strips. FoxTrot is one of those comics everyone I know within a certain segment of my generation knows by heart, at least for a few years. Like Calvin and Hobbes, it was a book fair staple and most of us definitely picked up at least or two volumes. (Or in my case all of them.) We read it in the newspaper. It matters to us.

It matters to us in a way other strips don’t too. FoxTrot felt to a great degree like a lightning bolt as a kid as the strip for us. Peanuts was funny but it took place in a nebulous time between the past and present. Calvin was too weird. By the time we were reading FBOFW, it was too serious to get.

FoxTrot though? It was for us. It was for us because it was wall to wall pop culture references that were day and date or even months in advance. The prerelease hype for Jurassic Park and Star Trek: Generations made it in as did comments on movie trailers around the time of release. It was current in a way strips never were.

It was also for us because it was written in our language. Peter, Paige, and Jason were frankly awful to each other in a way that never felt cartoonish. They acted like us. They talked like us. Even the parents felt real despite us never knowing how true they were because they were sarcastic, talked to each other like real people.

It was also on our level of comedy. It was sarcastic, sure. It was pop culture humor heavy definitely. But it also had impeccable physical comedy. Amend was proudly a cartoonist. He leaned into the beauty of a great expression, a great reaction shot, a bit of exaggeration. So it was damned funny.

It was also one of our first encounters with a satirical voice. Amend wasn’t afraid to skewer the media he loved. He mocked overhype when Jason and Marcus dared to ask if they were setting themselves up for a letdown before walking into Jurassic Park. (No.) There were blows at computer culture and how silly it was. He went after (and continues to go after) Disney with glee. We felt for the first time in on something.

All of that speaks to why FoxTrot felt great as a kid. But that doesn’t explain why it endured. Full House had an exceptionally funny cast and played to kids yet I doubt many of us feel the same now about it. Having recently binged this strip, I’m moved to ponder this. Why does FoxTrot last?

All the things I just listed remain completely true. It depicts real pop culture, not some imagined view. The characters are true to life. It’s still backbreaking funny. But there’s more.

Let’s start with the pop culture point as it’s the one that’s the most fascinating to perceive now. To read FoxTrot is to read a cultural history of the last 30+ years. And it doesn’t feel dated because none of the references ring false. Most are filtered through Jason and he’s a great everygeek. Jason’s reactions to these things either match how we felt or how we would feel. Jason also fixated on the things we absolutely did and still do. And again, the references are at times genius bonus level good. Amend clearly is one of us and thus the strip reads as record.

That geekery reflects how oddly personal the strip is. Amend is a World of Warcraft playing Springsteen fan who clearly loves sports. I don’t need sources for these. The writing on them–and we forget that the strip particularly in the 80s was the rare estuary of geek content and jock content–says it all. That said, his twitter feed gives away exactly how true this is. Maybe it’s not tremendous autobiography but it’s not anonymous.

And that winds up giving the strip a POV that sets it apart. Amend crafts a universal but very distinct world. Like all worlds, every choice is specific. And a lot of those small choices matter. Because this isn’t just a pop culture/family strip. It’s one that reflects a lot of realities that in 2005 we sure as hell weren’t really discussing and are still struggling with now.

So before I go any further, I’m giving you an out. I’ve spent over 800 words and I’ve got more to go. If you want to walk away on these and not dig into some thorny issues that are largely a matter of interpretation, walk away knowing I love the strip and that’s that. But part of why I love it gets tricky to discuss. So…here you go.

One of the things that as to be discussed regarding FoxTrot is the indisputable shift to Jason as the POV character. Beginning with the big summer long storyline in 1997, Jason’s stories dominated. Peter’s lovelife, Andy and Roger’s worklives, and Paige’s romantic dreams featured a lot less until the strip ceased in dailies in 2006. They were still there–and I think Jason’s dominance is a shade overstated–but less.  Jason is a geek. And geek communities haven’t been anything too positive to discuss in recent years. It would be so easy to find Jason an unbearable, cringeworthy figure in this light.

But Bill Amend created a character that I think has a lot to do with why FoxTrot is less a nostalgia fix for me and an almost shockingly fresh one that happens to mostly run 14-32 years ago. Eileen Jacobson rules. She just rules so hard. Eileen is the ultimate girl geek in comic strip form and her conflict turned playfully combative friendship with Jason made the strip’s last decade in daily form pop.

Eileen is the absolutely critical check Jason needed and the voice of the fangirl. She’s the girl gamer who pushes back on Jason’s immature behavior. At one point she pretends to be a stranger in WoW just to prove to Jason they’d be friends if he’d get over himself. She calls him out on his ludicrous LOTR vs Harry Potter beliefs (wow have we heard THAT before.) And she doesn’t put up with how poorly he treats her though she has some level more patience than in real life because she’s a comic strip character and needs to stay around.

Eileen honestly feels like a character who, if she were created for a long running series like she was in the mid 90s, would be despised by a certain segment of the fans. But that’s exactly why her thread feels important. Because Amend was on representing girl geeks early. Hell he even got an Asian girl geek in in 1997 in the form of Phoebe Wu. This feels modern, not dated in its mindset.

And once you look at FoxTrot as a strip ahead of the curve, you realize it didn’t start with Eileen. This forward thinking mentality pervades the strip from day one.

For one thing, Amend always wrote Andy and Paige pretty great. They’re give ample time with stories that let them be just as well fleshed out as others. Paige in particular is painted as an insecure, emotional teenage girl but Amend feels so hard for her. When she’s at her lowest the strip paints her feelings as understandable and normal, not funny. He even does a subtle touch of giving them their girl geeking. Andy gets to be fixated on Titanic and it’s just the same as Jason’s obsessions with the same relatable energy.

He also gives us a nice treatment of toxic men. When Peter shamelessly hits on girls (during his shockingly brief time as a single), he’s painted as an asshole. Paige encounters guys who act gross towards her and she gets to be extremely aggressive fending them off. Leering over the swimsuit issue even leads to Peter getting chewed out by Andy and it feels a hell of a lot like current discussions on Twitter. Trust me, this has not always been true in mass media. See the pornography addiction shared by Chandler & Joey on Friends.

But then there’s his handling of Peter’s girlfriend Denise. Honestly, reading her early strips prompted this entry to exist and it’s why it’s housed on my blog. Denise is a blind girl in a love interest role, the definition of a character unlikely to have agency. But she does. She’s depicted as angry that nobody lets her be independent and looks down on her at the same time she’s given a potent sex drive, at one point having Peter over to “tutor” her in a subject she’s an expert on as a pretext to making out. That’s a hell of a lot to give a supporting character in a comic strip when mainstream media can’t do that much.

FoxTrot has always been and in Sunday form remains a progressive strip. Yes, that’s definitely an interpretation of the text and not a direct reading but the evidence is there. It’s not perfect, as would be expected in a strip where everyone is a caricature to some degree, but it explains why the strip needs to be seen as a cut above.

FoxTrot isn’t the surreal Sgt. Pepper’s of its peers but it’s definitely the comics version of the early Beatles albums. You know when it was made but when you study it, it still feels like it’s fresh. It hasn’t stopped being funny. I doubt it ever will. It remains the brash, funny, relatable voice of its generation.

To Bill Amend, I raise my glass. Thank you.