“If u can “disguise” your Autism then imo u cannot possibly have autism. “

One willfully ignorant tweet can set me off. That’s literally all it takes to get me blogging here. Seeing an attitude so absurd it makes me have to write. That’s what that comment did.

Autistic people live with one of the worst catch-22s in society. We are forced to put on a mask every day if we hope to function in society. If we don’t, we’re not able to survive in it. We’re ostracized and criticized to the point of emotional distress. We can’t expect to find work or peers.

Thus we learn to develop a mask. Many of us get pretty decent at it. We’re intuitive and pick up what we need to do to get by. It’s not hard to realize curbing your echolalia and flapping will help you get a job. We learn to act right.

And what do we get for it? We’re erased. The assumption becomes that since we can turn it off for a bit, we must be able to turn it off permanently. And I’m not just expanding on that tweet. I’ve heard people in my real life assume that because I can fake it for a bit, I must be exaggerating my autism.

This is something that has frustrated me my entire life. I can’t allow my mental health issues out into the open because they’re frowned upon socially but when I’m surviving it’s assumed they’re not there. I’ve had to give variations on this very topic repeatedly over the years to friends and family and I’m not sure society gets it.

So let me put it in a way that’s clear:

First off, we’re always autistic. It’s a condition that’s cradle to grave. It’s treatable but not curable. There are certain mental patterns that aren’t going away. We are who we are and you need to accept that.

Second, we’re able to fake it but faking it is exhausting. Imagine trying to play a role permanently but behind closed doors immediately reverting to yourself. It is utterly tiring to constantly put on a part. Not just physically but definitely emotionally. You feel frustrated because you can’t just collapse and be yourself. You hurt because you know you’re rejected.

Third, and most importantly, nobody knows what goes on in the minds of another. We’re often shocked when highly successful people take their own lives but the painful truth is we don’t know what they feel. It’s no different for any other condition. Just because you think we’re playing the part well doesn’t mean we’re seeking attention when we meltdown. Let me stress that nobody on Earth wants THAT attention. We want attention for good things we do. We are the best experts on autism, not someone who’s read a mommy blog!

Sadly I don’t expect this ever to change. But we solider on through the uncanny valley nonetheless fighting. 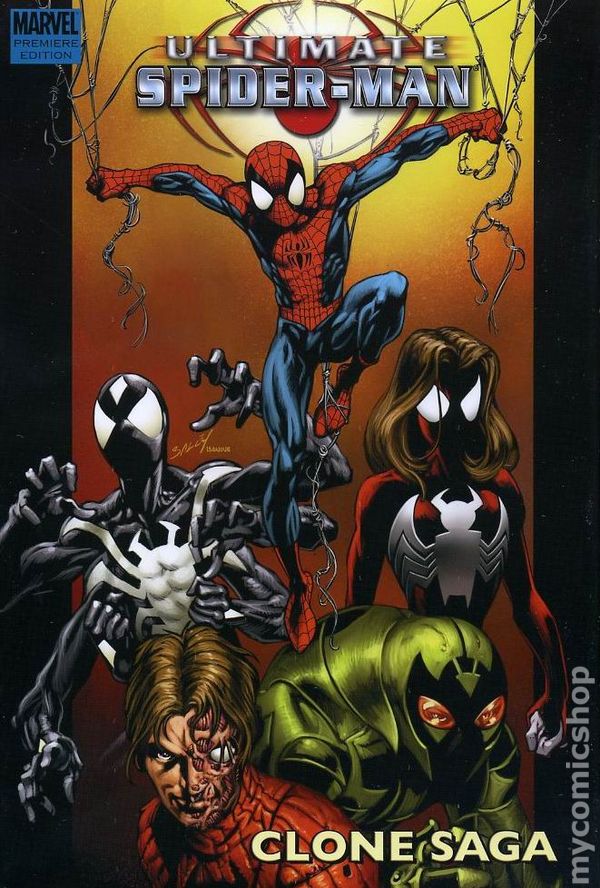 I bought the book at a Borders in Memphis, Tennessee in June 2007. It wasn’t cheap, a 29.99 hardcover of Ultimate Spider-Man: Clone Saga. The book was bought in celebration of my new job. It was a nice, slick volume and I couldn’t wait to read it after I finished a Flash GN and a Star Wars novel. I read the Flash volume and was in the midst of the Star Wars book when I lost that new job in under 36 hours.

The following things happened between then and today. 13 months of job interviews. 9.5 years of a job. I bought a car. I dated a girl for a few weeks. I dated a girl for a few years. Married her. Moved three times with her. We struggled with fertility. We stopped struggling with fertility. Lola was born. Lola had her 1, 3, 6, 9, 12, 15, 18 month appointments. The book never left the shelf. I would not read it.

Why? Why wouldn’t I simply read a comic? Bafflingly I actually read all of the other books in the series. But I couldn’t open this volume. Why? Because as silly as it was, I knew that if I ever cracked it, something seriously bad would happen. I was bound by a supersition.

How do we explain superstition? In theory, we should know better than to give into it. It’s an irrational belief that can easily be disproved. Reading a graphic novel exists in isolation for me and me alone. There’s no butterfly effect if I do. But we all still have them.

The very simple explanation is evolutionary. Superstitions were built into us as a matter of survival and many of our best known ones have their roots in some actual reason that got lost. They’re also cultural, such as never saying the name of “The Scottish Tragedy.” They unite us. But our personal ones have neither. They’re based on our experiences.

A superstition is a mistranslation of feelings I find. When I walk through a bookstore in a certain order, I’m not trying to make something good be there. I’m delaying being let down. I

In the case of this book I nay have claimed I wouldn’t read it out of fear of something bad happening, but the truth was simple. If I read it, I was letting go of the West Memphis saga once and for all. There wouldn’t be anything left to do. I could truly move on. And no matter how many times I write about that, I wasn’t letting go. This had become the last step and I wasn’t ready to accept it.

But it was time. You know after a certain point you have to step on the crack to know nothing bad will happen. You have to get that closure to move on. I’m writing a lot about the art of 2008 this year in no small part to close that part of my life once and for all. This was part of it.

So I sat down with Lola and read the book. It didn’t take long. Roughly 40 minutes. It was nothing shocking, after all I’d figured out what happened. It was first rate though with amazing work from the Bendis/Bagley team. So yeah, I had a great time. And in under an hour, it was done.

And then that was it. It stopped being a mythic totem on my shelf and went back to being just another book. There’s no magic energy to it. I took its power.